A DIAMOND NO LONGER IN THE ROUGH

In 1968, when Boots and Al Brounstein founded their winery Diamond Creek on Napa Valley’s Diamond Mountain, the going price for a bottle of great Napa Cabernet was $5. (Just about the only wine that cost more at the time was Heitz “Martha’s Vineyard” Cabernet Sauvignon, priced at an astronomical $7 a bottle).

Although he and his wine were unknown, Al had decided to make the gutsy move of going to $7.50 a bottle for his cabernet. When the couple told their Wells Fargo banker about the plan, the banker called their loan, telling them they were crazy to ever think their cabernet could command $7.50 a bottle. Diamond Creek cabernet sauvignon went on to become the first wine in California to cost $100 a bottle (for the 1987) and the first to cost $200 (the 1992).

Al Brounstein, who died in 2006 from complications with Parkinson’s Disease, was one of Napa Valley’s most dynamic early vintners. Owner of a small Los Angeles-based company that produced private label over-the-counter drugs, Al was the sort of natural born salesman who didn’t take no for an answer.

Dozens of stories recount his determination, including his planting of “suitcase clones” of cabernet which he “acquired” in Bordeaux from one of the then four First Growths. (At the time, Mouton Rothschild wasn’t yet a First Growth). Brounstein, an amateur pilot, flew the cuttings into Mexico, landing the plane on a beach, and then smuggled the cabernet vines into California. Diamond Creek later billed itself as the “first cabernet sauvignon estate winery in Napa Valley.” (While small estate wineries specializing in cabernet sauvignon are common today, early cabernet producers from BV and Martini to Krug and Inglenook all purchased grapes and/or made wine from many different varietals).

This past week, I went to Diamond Creek to taste the cabernets with Boots (who, with a twinkle in her eye, declines to reveal her age) and son Phil Ross. As has been the case since the beginning, Diamond Creek makes 3 cabernets —Red Rock Terrace, Gravelly Meadow and Volcanic Hill. (In some years, a fourth wine—Lake Vineyard—is also made). Brounstein, a red Burgundy lover who was inspired by the Domaine de la Romanée-Conti, never once considered blending the small contiguous parcels to make a single cabernet.

Dark and smoky with a rich cocoay flavor and lots of grip. 92 points KM

Beautifully intense. The most structured, savory, and complex of the three cabernets. Considerable tannin and a delicious “salty” minerality. Loads of concentrated fruit. Seems like it’s destined to last for decades. 94 points KM 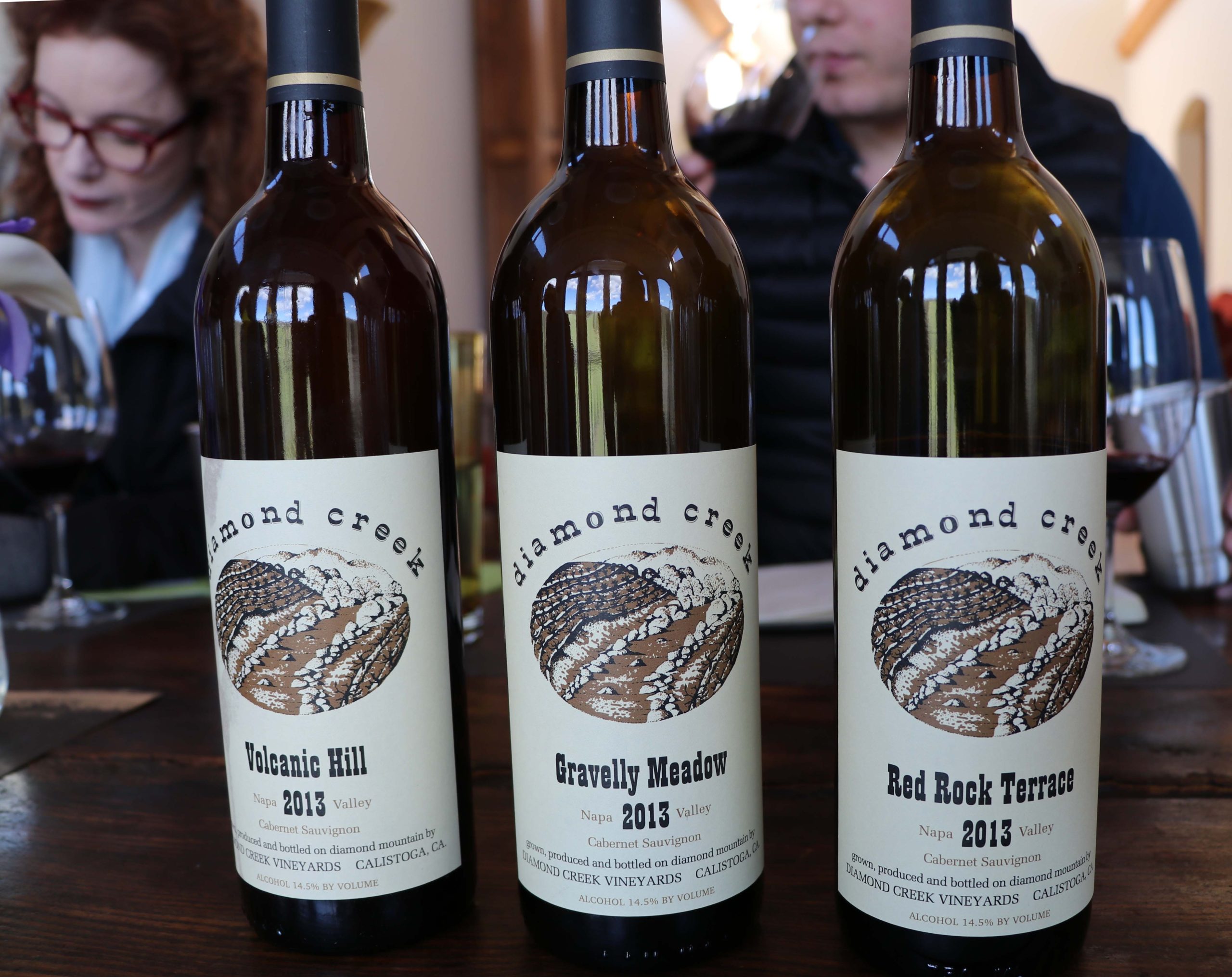